Reporting of Climate Finance under the UNFCCC 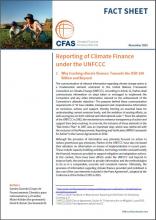 The communication of relevant information regarding climate change action is a fundamental element enshrined in the United Nations Framework Convention on Climate Change (UNFCCC). According to Article 12, Parties shall communicate information on steps taken or envisaged to implement the Convention and any other information relevant to the achievement of the Convention's ultimate objective.[1] The purpose behind these communication requirements is “to have reliable, transparent and comprehensive information on emissions, actions and support, thereby forming an essential basis for understanding current emission levels, and the ambition of existing efforts, as well as progress on both national and international scale”.[2] Since the adoption of the UNFCCC in 1992, the mechanisms to enhance transparency of action and support have been evolving. In concrete, the inclusion of these elements in the "Bali Action Plan" in 2007 was an important step, which was reinforced with the inclusion of the Measurement, Reporting and Verification (MRV) Framework for Action[3] in the Cancun Agreements in 2010.

Although the provision of information was primarily focused on action to reduce greenhouse gas emissions, Parties of the UNFCCC have also increased their attention on information on means of implementation in recent years. These include capacity-building activities, technology transfer and particularly the financial resources provided to support mitigation and adaptation actions. In this context, there have been efforts under the UNFCCC and beyond to improve both, the mechanisms to provide information and the methodologies to do so in a comparable, accurate and consistent manner. Ultimately, the provision of information regarding climate finance provided and mobilized is also one of the core elements included in the Paris Agreement[4], adopted at the Conference of the Parties (COP) in 2015.

Michel Köhler
Co-Founder of the greenwerk.