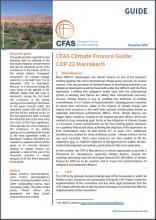 Many UNFCCC stakeholders see climate finance as one of the linchpins holding together the entire international climate policy process, for several reasons. First, the provision of climate finance to developing countries is an obligation developed countries have both under the UNFCCC and the Paris Agreement. Fulfilling this obligation builds trust that the international system is working and Parties are taking their commitments seriously. Second, climate finance is key to enabling the fulfilment of existing commitments, it is a "means of implementation" allowing poorer countries to report their emissions, adapt to the impacts of climate change and reduce their emissions in line with their national climate plans known as nationally determined contributions (NDCs). Third, climate finance can trigger higher ambition, leading to the highest possible efforts, which are needed to close remaining gaps. As far as the mitigation of climate change is concerned, current commitments are far from putting global emissions on a pathway that would allow achieving the objective of the Agreement to limit temperature raise to well below 2°C or even 1.5°C. Additional incentives are needed for more ambitious action - climate finance can be one such incentive. Much more resources are also needed to fill the adaptation gap, i.e. fulfil the objective of the Agreement to enable climate-resilient development everywhere, particularly for the most vulnerable.

In this context, the COP in Marrakech is a critical opportunity to provide a framework for transparency regarding climate finance, discuss the roadmap describing how the envisaged annual USD 100 billion of climate finance by 2020 are to be reached, and to ensure the aspired balance of mitigation and adaptation finance.